In this comedy, Dr. Meg Carr is an oncologist who cries when her patients die. She’s been fighting for twenty years for California to have a Right To Die Bill so that patients can take death into their own hands and die peacefully. But Meg has to face the reality of what she believes in when a very sick 17 year old terminally ill patient shows up at her home.

Stacy Sherman is an Oscar nominated and Emmy award-winning documentary filmmaker (God Sleeps In Rwanda). She Associate Produced the multi-award winning documentaries Chasing Ice and The Babushkas of Chernobyl, which has a 100% on Rotten Tomatoes.

Patrons will be required to wear masks and show proof of a negative COVID test result (within 48 hours). A vaccination card may be shown in lieu of the test. Photocopies or a photo on your phone of medical records will be accepted.

Also, due to COVID, there will be no wine service before or reception after the reading.

Rescue is by Houston’s own Crystal Rae! Catch it starting November 5 on either Wordsmyth’s Facebook page or on YouTube. There will be a YouTube Premier at 7 pm on November 5. Then on Monday, November 8, join us for a talkback on our facebook page! 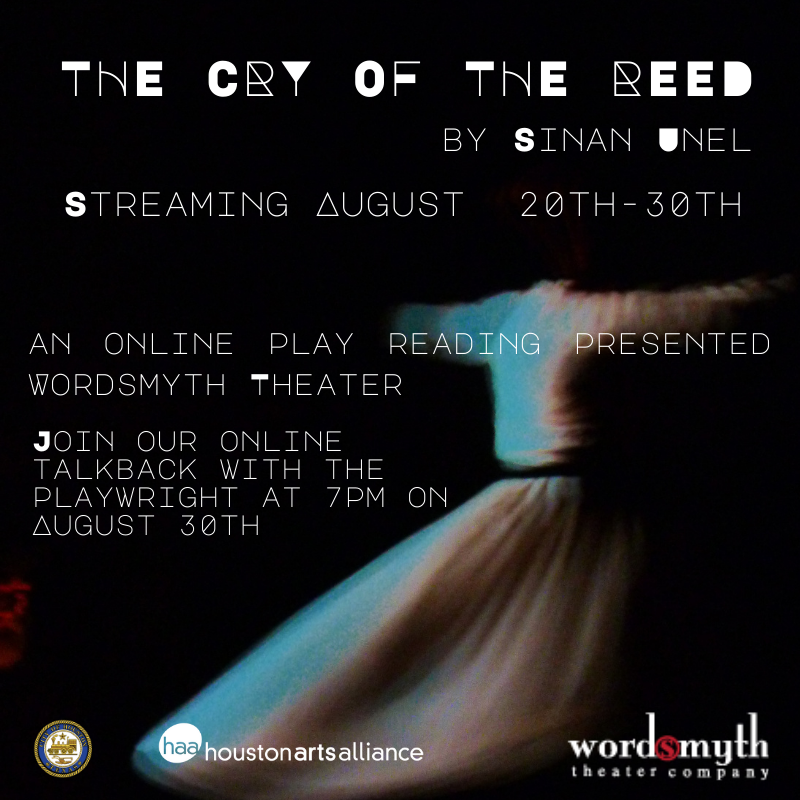 A journalist and her colleague find themselves unexpectedly “detained” by a band of insurgents as bombs rain down on a war-torn landscape. Her captors offer her one telephone call – a chance to reconnect with the mother she hasn’t spoken to in 10 years, now living in Turkey and preparing for a festival celebrating the great Sufi poet Rumi. Violence, religion, and the beauty of whirling dervishes collide in this powerful portrait of a world at war.

The reading is in Turkish/English with subtitles, and will be available to stream on our Facebook page and YouTube channel from August 20-30! On Monday, August 30, at 7:00 PM Central, we will have a live talkback with the playwright hosted on our Facebook page!

Wordsmyth’s 2021 New Play Reading Series begins May 18th on Facebook and YouTube with Elizabeth A.M. Keel’s adaptation of The Canterville Ghost! The reading will be available from May 18-24, with a talkback on Facebook on the evening of the 24th.

In this one-act adaptation of Oscar Wilde’s ebullient short story, the Otis family moves into Canterville Chase. Their effervescent American charm grates on Sir Simon de Canterville, the resident ghost who does his level best to terrify Hiram, Lucretia, and their sons right back out again. But he cannot show quite the same ire towards their daughter Virginia, who might be the very girl prophesied to save his tormented soul.

It is with sadness that I write that our friend Patricia Barry Rumble died last night. She was a playwright and we did her play Au Revoir, Chere Bebe, in May of 2011. She will be missed.

In collaboration with Gerald vanHeerden and vMHF Theatricals in New York.

A gay man who tried to save children during a mass shooting suffers from survivor’s guilt and cannot control his temper. A psychiatrist persuades her husband, a Marine sergeant who lost men in Afghanistan, to talk to him. The sergeant admits to him that it was an American drone and not enemy fire that killed his men, and disaster results: Each man tries to goad the other to commit suicide.

This a FREE event. But donations are welcomed!! Please visit our donations tab!

Is it so cruel for the world for one to be a perfectionist? Is the victory of my handwork a defeat for you? It’s just so typically me to want everything…

Come out to see the reading of Just So Typically Me

Reading of the new play Come Find Me. Directed by Rebecca Udden, AD of Main Street Theater. Can be watched here: https://www.facebook.com/wordsmyththeaterco/posts/3778894658810456 or https://www.youtube.com/watch?v=dZrP1KLb72k

Talkback with the playwright and director will be on Monday, Nov. 23, at 7 pm.Ilda talks to people who aren’t there. Tilly hears fingers clawing at her door. All the while, the moon keeps her watchful eyes on them. Come Find Me is a time-hopping, feminist ghost story spanning two time periods. As it weaves its way through the halls of Trenton Psychiatric Hospital in 1907 and a beach house during the tumultuous summer of 1969 we discover the secret-laden lives of three women and how their worlds intertwine.

Wordsmyth continues our 2020 New Play Reading Series with The Goodbye Levee, by Mike Solomonson! Join us on Monday, November 9, at 7:00 PM Central for a talkback with the playwright and director, and leave your questions and observations in the comments.

Come join Celeste’s party! After a devastating diagnosis, Celeste Banks to invite the audience into her confidence as she hosts a “Goodbye Party,” where the audience assists Celeste through erratic memory and hallucinatory interruptions turning into chaos and comic careening as she prepares for the inevitable.

We are starting our reading series — online! And our first reading is of Everything You Can Do (To Make the World A Better Place) by Ian August. A tale of Kelly, an activist novice and Sophia, an activist extraordinaire.

The reading was recorded and is now streaming on our fb page, https://www.facebook.com/wordsmyththeaterco/posts/3659427257423864; and our youtube channel: https://youtu.be/l5wdvztGp9w.

We will have 5 more readings between now and the end of the year — so keep an eye on this website!