Four teenage girls are tasked with the duty to taste Hitler’s every meal for poison.It is supposed to be the highest honor, or so they are told. How can these young women handle such an honor? 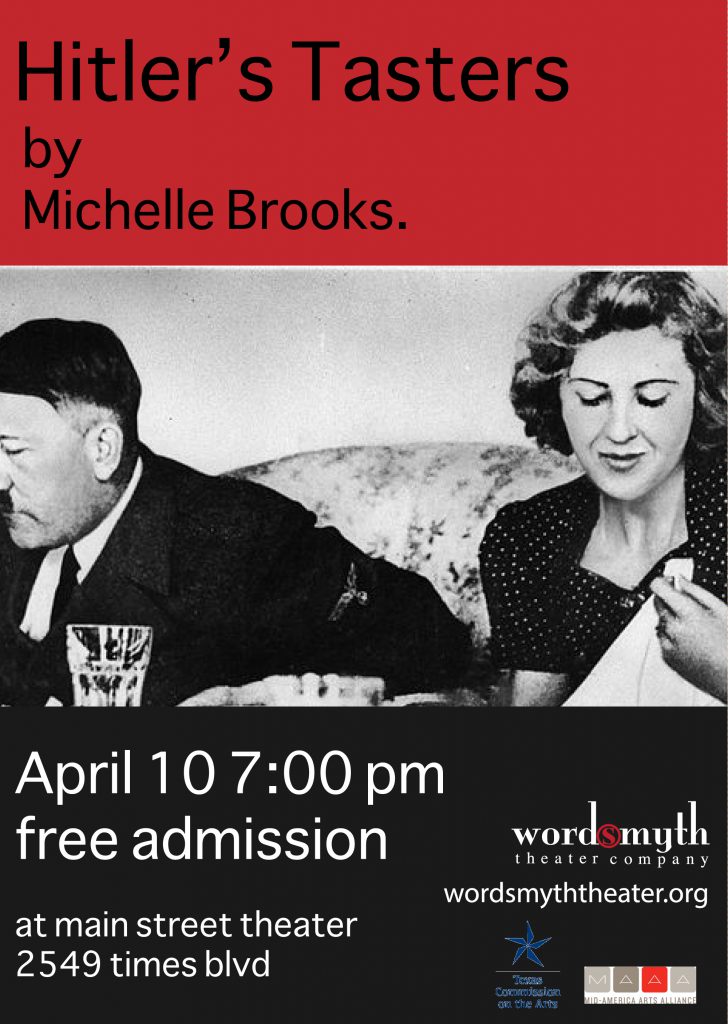 Four teenage girls are tasked with the duty to taste Hitler’s every meal for poison.It is supposed to be the highest honor, or so they are told. How can these young women handle such an honor?

Sometimes family becomes a dogfight. In their ancestral house in rural California, surrounded by a dead walnut orchard, brothers Boomer and Dirt struggle with each other, with themselves, and with their dog-breeding business. As their pregnant pooch swells, they seem on the way to strike it rich. Their dreams are disrupted when Boomer brings home Marisol, who should be a one-night stand, and Dirt finds a boy who will never grow up. 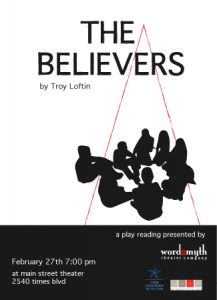 There has already been one raid by the FBI resulting in some deaths.

Now, the leader of the Branch of Zion has ordered the members of his flock to wait in their rooms.

But some of his followers are not the kind to just sit and wait. 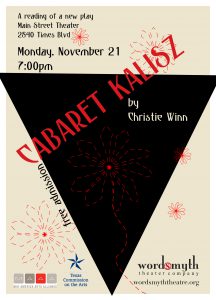 If you have a skill, you are preserved.  The tale of women in a concentration camp — their loss, survival and music.

ENGAGE Houston is generously supported by Houston Endowment and implemented by Mid-America Arts Alliance with support from the National Endowment for the Arts, the Texas Commission on the Arts, and foundations, corporations and individuals throughout Arkansas, Missouri, Nebraska, Oklahoma, and Texas. 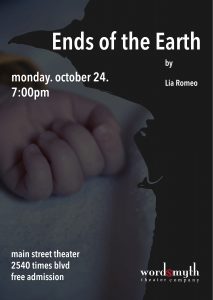 Global warming has hit hard, coyotes are invading the cities, and the family dog can talk.  Let’s have a baby!

Today we mourn the loss of a great playwright and mentor, Edward Albee.  Albee was an incredible personal inspiration to many of our founders and helped us conceptualize the work of this theater.  He was always an encouragement when he graciously attended our readings and though he will be dearly missed, his legacy continues. 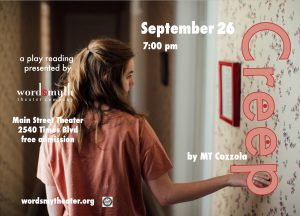 Jorie is an elite teenage student and athlete with a perfect family and two loyal and brilliant friends. When a shocking event occurs at the girls’ slumber party, Jorie and her family are confronted with choices they never expected.  What does Jorie have to do to keep her band of friends together?

Join us for Cultured Cocktails from 5-8 on Thursday, Sept 22 at Boheme, 307 Fairview, 77006  A portion of the proceeds will go to Wordsmyth Theater.  While there, learn about our upcoming readings, including the next one on the Monday after.

Mildred’s Umbrella Theatre Company and Wordsmyth Theatre proudly present Museum of Dysfunction VIII: A SHOWCASE OF SHORTS. Now in its eighth year, this annual short play festival features new pieces by playwrights from across the nation and produced by the professional actors and designers in the Mildred’s Umbrella Company. With over 200 submissions this year, only the top nineteen will be produced over two consecutive weekends. The first group of nine plays will run June 23-25 and the second group of ten will run June 30-July 2.

“We love bringing new voices to Houston,” says MU Artistic Director Jennifer Decker, “and each year we get to pack in a bunch of them into two weekends. It’s a little chaotic and crazy, but it’s fun in the end.” The plays touch on several topics but all stay within the Mildred’s Umbrella aesthetic of quirky, dark, and edgy. Each play runs under fifteen minutes and features a minimal set, cast, and technical requirements to highlight the scripts’ strengths.